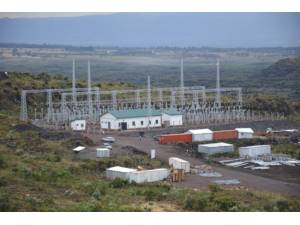 The Menengai-Soilo, KETRACO’s first project towards the evacuation of steam power from the Menengai crater, is just months away from completion. This 12.6km line will evacuate 105MW of geothermal electricity from the Menengai wells developed by the Geothermal Development Company (GDC) and inject it to National Grid at Soilo substation.

GDC recently signed power purchase agreements with 3 independent power producers to convert the steam at Menengai to electricity. This electricity will then be transmitted by the KETRACO via the grid. Quantum Power, Sosian Energy and OrPower22 and the Independent Power Producers (IPP)s who won the tenders to manage the Menengai steam already available in the first phase of Menengai steamfield project.
The project scope includes the construction of a 132kV substation at Menengai, extension of the bay in the existing Soilo substation and transmission line infrastructure connecting the two.
In the future the substation will evacuate 400MW via 400kV lines to meet projected the growing demands.

Despite the many challenges faced due to the cavities and fault lines in the soil structure at the crater, which run across the entire substation area, some deep to upwards of 3 metres, the project’s implementation approaches its final stages. Tower erection stands at 70% complete while substation works at Menegai substation are at 80%
“This has been a challenging project for us. It called for design and construction of a concrete raft to act as a separator membrane and form a stable, continuous platform from where all foundation works for equipment support and structures would be founded,” stated KETRACO’s acting MD FCPA Fernandes Barasa.

“In addition there have been deep excavations at the Menengai substation site. Because of the poor soil formation, all the backfilling soil could only be hauled for an average 13km outside the Crater. Even more challenging is the backfilling of tower foundations which are 30km away from the murram borrow site,” he added.

The project which commenced construction in April 2014 is scheduled for completion in May 2016. It is fully financed by the Government of Kenya at an estimate cost of Kshs.0.8 billion.
KETRACO is currently undertaking 35 projects across the country to evacuate power, strengthen the existing grid system, give access to areas that were off-grid previously and interconnect Kenya with neighboring countries.