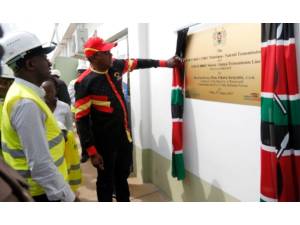 The Mombasa – Nairobi transmission line is the first 400kV flagship project to be initiated by the Kenya Electricity Transmission Company (KERACO). At 482km and 400kV, the Mombasa–Nairobi Transmission line is the longest and highest voltage line that East Africa has ever seen. It has a transfer capacity of 1,500MW, which is only 200MW less than the current national demand that stands at 1,700MW. Furthermore, the capacity of this line today is equivalent to 19 times the capacity of the old line built in 1969, whose capacity back then was 80MW. This is indeed a great milestone for Kenya.

The Mombasa – Nairobi and Suswa – Isinya transmission lines will improve the transfer capacity of electrical energy as well as address the challenge of low voltages, high transmission losses, unreliability of supply and network security. At the same time, the two lines will also strengthen the national grid system and enhance capacity.

For the first time in Kenya, a 220kV underground cable was constructed from the Nairobi National Park to Embakasi substation in order to avoid the flight path of the Jomo Kenyatta International Airport.

Speaking during the energization exercise, the KETRACO Managing Director FCPA Fernandes Barasa demonstrated how the Mombasa – Nairobi transmission line and the Suswa – Isinya transmission line would provide accelerated opportunities for investors and additional investment in power such as the generation of solar, wind, geothermal, coal and gas sources.

FCPA Barasa urged investors to take advantage of the project and partner with KETRACO in the transmission of the generated power.

“With the facilitation of a 24-hour economy that enhances security, we shall soon witness the setting foot of larger numbers of manufacturers in this county, more businesses will extend their working hours thereby creating new jobs, hospitals will invest in better machinery that will take care of the unwell, and learning institutions will be able to invest in high-end equipment for their laboratories thus producing bright students and all these will give rise to a stable economy. With a stable economy, the county will rid itself of vices caused by unemployment,” he said.

The Chairman of KETRACO Board of Directors, Dr. Kenneth Sigilai, emphasized KETRACO’s interest in ensuring that the Government’s promise of availing adequate power at affordable tariff by the year 2030 and ensuring all Kenyans have access to electric power comes to fruition.

“In future, the Suswa – Isinya transmission line will enable Kenya, Uganda, Tanzania, South Sudan, Rwanda, Democratic Republic of Congo and Burundi to harness economic power surplus available in different countries throughout the year.  The line will also act as a major connection point of the wind power from Turkana which upon termination at Suswa will be transmitted to Nairobi thus offering an alternative to hydro and geothermal power during peak demands,” added Dr. Sigilai.

The successful infrastructural construction of the Mombasa – Nairobi line was achieved with the financial support of the Government of Kenya, the African Development Bank (AfDB), the French Development Agency (AFD), and the European Investment Bank (EIB). The total cost of this expansive project was Kshs.20 Billion.

Funding for the Suswa – Isinya Transmission Line came from the Government of Kenya, the French Development Agency (AFD), and the European Investment Bank (EIB). The total cost of this project was Kshs.5.5 billion and the contractor is Jyoti Structures from India.